Akshay Shroff has been a successful advertising sales consultant of domestic and international media, spanning over three decades, first in New Delhi followed by Mumbai. He has been associated with voluntary organisations like the Lions and the Junior Chamber International in senior positions and also with trade bodies like the Delhi Advertising Club and the Press Club of India. Married to Jayna since February 1981, he has been a responsible family man, a doting father of Rohan and a loving father-in-law of Stuti. Has a Bon Vivant nature, nurturing friendships since over five decades. Travel, trekking, reading and writing have been his passionate hobbies. Lover of animals and Nature, dogs have been his companions on and off. While THE MONK is his debut novel, writing will now be his full time engagement. 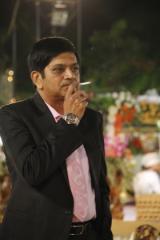 Lets have a glance on what he has to say to my Questions:

Nita: Hi Akshay, I welcome you to ‘’All about an Author’’
Akshay: Thanks

Nita: Tell me a bit about yourself?
Akshay: I have been a successful advertising sales consultant of domestic and international media, spanning over three decades, first in New Delhi followed by Mumbai. I have been associated with voluntary organisations like the Lions and the Junior Chamber International in senior positions and also with trade bodies like the Delhi Advertising Club and the Press Club of India. Married to Jayna since February 1981, I have been a responsible family man, a doting father of Rohan and a loving father-in-law of Stuti. Have a Bon Vivant nature, nurturing friendships since over five decades. Travel, trekking, reading and writing have been my passionate hobbies. Lover of animals and Nature, dogs have been my companions on and off. While THE MONK is my debut novel, writing will now be my full time engagement.

Nita: When and how did you start your journey of writing?
Akshay: I have been an avid reader since my childhood. Around the same time, I also kept dreaming of becoming an author. When I was in the X Standard, an essay on the progress India had made since independence was selected and published in the school’s annual book. When Neil Armstrong stepped down on the moon, my write up was put up on the Notice Board of Wilson College and it generated rave reviews. Would keep writing something or other on various subjects, particularly on places I would visit as a tourist. A decade ago, I thought of writing a novel. Initial couple of manuscripts didn’t muster their worth to be in print. In July 2012, it suddenly dawned on me that I should select a topic that would be not only a burning issue but also be acceptable to universal readers who would want to have meaningful insights into the subject. The Monk began taking shape in my mind and by November end the same year the first draft was ready.

Nita: What inspired you for writing?
Akshay: As mentioned above, the habit of reading everything under the sun since childhood nurtured a burning desire to be a writer. Subsequent accolades in school and college boosted my confidence.

Nita: Is there any specific genre that you prefer to write or read?
Akshay: I read everything. But write mainly general fiction.

Nita: How will you explain your books?
Akshay: While The Monk is about the widespread menace of terrorism, it harps on patriotism on the one hand and also tries to unravel the consequences of the acts of terror mainly on the unsuspecting and innocent victims.

Nita: How was your book publishing journey?
Akshay: It has been very tough and arduous. Literary agents would revert with a curt ‘sorry, not for me’; most would not bother to respond at all and a few who asked for sample chapters would come back negatively. Finally, in March 2013 a publishing company sent their letter of Intent and asked for the complete manuscript. While they took inordinately long to sign the Contract, I edited, re-edited, added some more stuff and converted the 60,000-word ms into a 71,000-word final product. And then began the search for yet another publisher who would like to publish, that too in a certain fixed time without any delay. Gargi Publishers were ultimately the chosen one.

Nita: Is writing your passion or profession?
Akshay: It has been a passion all the while, but would wish to turn it into a profession now. Professionally, though I am not sure how much can I earn, unless, of course, The Monk catches the fancy of discerning readers and become a resounding success.

Nita: How did you manage time between your full time profession and writing?
Akshay: The Time Management skill has been honed in since very early in life. Evenings, weekends and holidays have been devoted to writing.

Nita: Best piece of writing advice from you?
Akshay: If anybody wishes to be a writer, start writing and keep at it until you attain your goal.

Nita: Something personal about you people may be surprised to know?
Akshay: I have been a dreamer all the while, with fantasy and reverie being alive even during my waking hours.

Nita: Do you have any upcoming books or plans?
Akshay: Yes, have written about 10,000 words of the next book, which I hope it to be out in the market by end 2017. This would be followed by a collection of short stories, by 2019?

Nita: Any message to your fans?
Akshay: Do comeback with suggestions, particularly if you don’t like anything about the book.

You can reach Author Akshay Shroff through below link:

You can get his book through below link:

''I am really thankful to Author Akshay Shroff for sharing his thoughts. It was really nice interacting with such a talented Author.''
Nita Samantaray
All about an Author
Posted by Nita Samantaray at 02:16

Hi Readers,
If you want any specific questions to be asked to author on their writing journey and life. Kindly let me know. I will try to include it in my Interview questions.
You can contact me through below form.
Nita Samantaray
All about an Author