J.W. Webb was born in northern England in 1961. Throughout his childhood he loved reading books and imagining stories. Among his favourites at that time were The Hobbit and the Chronicles of Narnia. Throughout his teens J.W. Webb went on to read lots more fantasy books and dreamt of one day penning his own. This he finally achieved back in 2001 and ever since then has been honing his craft. After serving in the British Army, travelling the world and working as a truck driver for twenty five years, and after losing is first wife to cancer, Webb crossed the Atlantic, remarried and set himself up as a full time writer in 2014. J.W. Webb now has four books out and is working on two more, which will conclude his epic fantasy series -- Legends of Ansu. 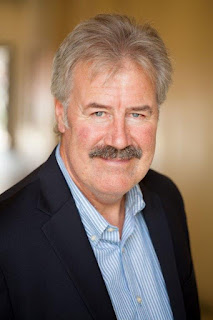 Lets have a glance on what he has to say on my Questions:

Nita: Hi Webb, I welcome you to ‘’All about an Author’’
Webb: Thanks, it’s very nice to be here.

Nita: Tell me a bit about yourself.
Webb: I’m an English author living in Georgia USA. I’ve been working on my fantasy series, Legends of Ansu for two decades, but only last year released the first three books. After many years driving trucks and working in construction, moving to the US enabled me to follow my passion, and set myself up as a full time writer.

Nita: When and how did you start your journey of writing?
Webb: Way back in the 1990’s, I’ve always had a wild imagination and I came up with this image of a character  - a warrior type - whilst people-watching in English pubs when I was staying far from home. The character (Corin) wouldn’t leave me alone. Others joined him, I drew maps, and slowly a world - Ansu - was born. Over the years it evolved and grew as did my list of characters.

Nita: What inspired you for writing?
Webb: I’m a storyteller, it’s a natural as breathing for me. I needed to get those stories down on paper. By doing that I became a writer, learning the craft of weaving words so they make sense and are a measure to absorb. Also, reading fantasy in my childhood/teens. Books like The Lord of the Rings, The Broken Sword,(Poul Anderson) and the Narnia Series charged my imagination.

Nita: Is there any specific genre that you prefer to write or read?
Webb: I write fantasy, it’s where I’m comfortable. That said, I’ve written a ghost story novella called the Haven, set in Cornwall, England. Its based around one of my late wife Rae’s paintings. She so loved ghost stories. I do plan to write in other genres, I like historical fiction, so I think I’ll have a go at that in the future. But first I’ve a score more fantasy epics to pen :)

Nita: How will you explain your books?
Webb: They are epic fantasy, no social message, just wonderful stories fusing magic and myth with grit and fast-paced action. I pitch my work halfway between Tolkien’s grandeur and the addictive realism of the characters in Game of Thrones. I also weave a wry humor into my characters - they have a lot of issues and like to talk about them, usually at the worst possible time.

Nita: How was your book publishing journey?
Webb: Oh, its been a voyage of discovery :) Long… I had an agent for a while over ten years ago. That led to a lot of excitement but petered out with little result. I made the decision to become an indie author, thus had to learn the tangled ropes of marketing, promotion etc — a whole new world. I have learnt a great deal and now consider myself reasonably savvy.  But I’m discovering new stuff every day. It’s a steep slope and a lot of work. The world of books is changing so fast it’s hard to keep up!

Nita: Is writing your passion or profession?
Webb: I’d lie if I said - It’s pure expression, it’s about the art and I’m not worried about making money. Certainly I want recognition and the rewards that come with that. I believe a good product deserves a good return, and my books are a very good product. That said, passion wins every time. I cannot not write (forgive the double negative :) And there are far easier ways to make money than writing. My stories come from deep within and burst their way out. My greatest pleasure comes from reading the reviews of people who have enjoyed them. That’s the high-octave fuel that keeps this ocean liner rolling over churning waters.

Nita: How did you manage time between your full time profession and writing?
Webb: I worked shifts, nights and long hours but found time to scribble during my downtimes. Sometimes I wouldn’t write at all and at others I would spill out huge chunks. For me it has always been organic rather than organized, though I like to think I’m more structured now. As I said it’s been a long process.

Nita: Best piece of writing advice from you?
Webb: Read, read and then read again. I don’t read anywhere near as much as I should these days. Words lead to words, you need to swallow old ones to spill out the new. Follow you're heart, don’t be dissuaded by naysayers. Learn all you can, listen and engage, but do your own thing. Keep going, its a marathon not a sprint. Don’t Give Up! - as Kate Bush sang in Peter Gabriel’s 1980’s hit

Nita: Something personal about you people may be surprised to know?
Webb: ? I sailed the Tasman Sea south of Australia in a brigantine during the 1980’s. I also caught venomous snakes for surveying whilst aiding the South Australia Wildlife Fund. It’s where I met my second wife, Joanne. I once hitched from Alaska to Key West Florida via California, a trip that took three months and left me with just five dollars. I enjoy music and quality wines, I’m an avid of Norse/Celtic mythology and I used to practice martial arts.I occasionally shoot a longbow in my fields. I once served in the Queen’s Guard in London.

Nita: Do you have any upcoming books or plans?
Webb: I’m working on two books at the moment. The Glass Throne and The Reluctant King will conclude the four book series about my roguish character Corin. I’m self-editing at the moment before sending on to my editor. When she’s done I’ll finish up and aim to have them both out late this year. They are very special as they all feature beautiful sketches by Tolkien artist, Roger Garland, who I know from my days in Cornwall.

Nita: Any message to your fans?
Webb: Thanks for being there, and please keep reading! There’s a lot of great stuff on its way. You’re the best!

Nita: I would love if you will give me some suggestions for my blogs ‘’Your Book Our Review’’ and ‘’All about an Author’’
Webb: I write a blog most weeks on jimrae90.com Lately I’ve been focusing on mini stories surrounding my dubious cast of characters. These serve as tasters that allow folk to dip into the world of Ansu and see if it’s for them. I think story blogs are fun. Anything about the writing process, imparting advice, sharing trials and tribulations is good.I read a lot of blogs about self publishing, some are brilliant though some a touch dry. I think blogs should be short, informative and witty. I think your blogs are great, Nita!  Thanks for having me on!

You can reach Author J.W. Webb through below link:

You can get his book through below link:

''I am really thankful to Author J.W.Webb for sharing his thoughts. It was really nice interacting with such a great and dedicated Author.''
Nita Samantaray
All about an Author
Posted by Nita Samantaray at 04:57

Hi Readers,
If you want any specific questions to be asked to author on their writing journey and life. Kindly let me know. I will try to include it in my Interview questions.
You can contact me through below form.
Nita Samantaray
All about an Author